Inflation and Unemployment – Is There a Correlation?

Students view a video on inflation and are introduced to the concept of unemployment. They then utilize Excel to create scatterplots, regression line equations, and correlation coefficients (r) for inflation and unemployment data from the 1980s, 1990s, and the 2000s. Students compare the results from the different time periods to determine the type of relationship and the strength of the correlations. This lesson is suitable for Algebra II, Pre-Calculus, or Statistics as an application of regression and correlation.

Will Be Able To

1.     According to the Phillips curve hypothesis expressed in the 1960’s, the correlation between the unemployment rate and inflation rate is:

2.     A correlation r value of .85, means that the relationship between two variables is:

Do relationships between two variables always stay the same?

[No, not always. Relationships can change over time.]

1.     Review the key points in the lesson with the following questions.

a.    What is inflation? [A sustained rise in the general level of prices.]

b.    What is unemployment? [The number of people 16 and older who are not working, who want to work, and are actively looking for work.]

c.     What is the Phillips curve and what does it hypothesize about the relationship between the rate of unemployment and the rate of inflation? [Hypothesis is a negative relationship, as one increases the other decreases.]

d.    Has the Phillips curve hypothesis held during different time periods? [No, our analysis of the data show it did not hold through the 1980s and 1990s.]

e.    How did regression analysis help you to evaluate the Phillips curve hypothesis? (By using the regression line equation you can determine the positive and negative relationship between the variables during different time periods.)

g.     Remind students that correlation does not mean causation.  Although unemployment and inflation are correlated, a change in one does not cause a change in the other.

Beginning with the work of A.W. Phillips in the late 1950s, economists have debated a potential causal relationship between inflation and unemployment.  In this lesson students have the opportunity to work with real data and discover what, if any, short term relationship exists within a decade and compare the regression and correlation (r) between different decades.  Students will evaluate the relationship between inflation and unemployment for a short run time period.

1.     Display Slide 2. Introduce the lesson by asking the following:

a.    What are the prices of some goods and services you have purchased recently? [Answers will vary.]

c.     What do you know about prices your parents paid for goods and services when they were younger? [Answers will vary.]

d.    What do you know about what your parents were paid for work they did when they were your age? [Answers will vary.]

2.     Display Slide 3. Introduce and define inflation – A sustained rise in the general price level for all the goods and services produced in an economy.

3.     Distribute Activity 1, and give students a moment to review the questions. Explain they will fill in the blanks as they watch the video.

5.     Review the answers to the close activity using answer key for Activity 1.

6.     Ask students to complete the quiz provided with the video. Review the answers.

7.     Display Slide 4. Introduce and define unemployment as the number of people 16 years old and older who are without jobs and are actively seeking work.

a.    David is a 29-year-old male.  He does not work.  He plays video games 8 hours a day and lives in the basement of his parent’s home. He has not filled out a job application in 6 months.  Is David counted as unemployed?  [No, he is not actively searching for work.]

b.    Martha is 34 and is a stay-at-home mom.  She does not work for pay outside the home.  Is Martha counted as unemployed?  [No, she is not actively searching for work or working for pay.]

c.     Jennifer is a 19-year-old female and works part time at the pizza parlor.  Is Jennifer counted as unemployed?  [No, she is employed.]

d.    Walter is a 45-year-old male and is not working.  He has submitted his resume to two firms this week.  Is Walter counted as unemployed? [Yes, he is not working and is actively searching for work.  ]

e.    Ask the students to provide additional examples of those counted and not counted as unemployed.    [Answers of those excluded – stay at home moms/dads not looking for work, those under age 16, and retirees.  Answers for those included will vary – working or actively searching for work, interviewing, applying for jobs, etc.  ]

10.  Display Slide 7. Utilize the Phillips curve pdf found at www.econedlink.org/lessons/docs_lessons/850_T12.pdf, to explain the relationship between unemployment and inflation in the 1960s.

11.  Display Slide 8 and discuss the following.

a.    What do you notice about the graph in years 1964 through 1969? [For this short time span, as inflation is increasing, unemployment is decreasing. There is a short-term negative relationship between the two variables].

b.    What kind of relationship is depicted by the Phillips curve for 1964 through 1969? [Negative relationship.]

12.  Explain that some argued that the relationship found in the Phillips curve was causal; that is, by allowing a little more inflation, policy makers could reduce unemployment.    Tell students that today they will investigate data from several decades to determine whether there is a correlation between the two variables for those decades and to determine if the Phillips curve is causal.

14.  Distribute a copy of Activity 2 to each student.

15.  Display Slide 10. Using the unemployment and inflation (CPI) data provided for the 1980s in Activity 2, instruct students to follow along as you work through how to create a scatterplot in Excel and calculate the regression line equation and correlation coefficient for the relationship between the two variables.

b.    Enter data into excel as shown below:

e.    Choose scatter, hover to show then select option for Scatter with only Markers.

g.     Under chart tools, go to layout, select Chart Title, then select Above Chart and change label from “Unemployment” to “1980s.”

i.      Then click on Axis Title, select Primary Vertical Axis Title, then Rotated Title and rename title to “Unemployment.”

k.     Select and move equation to side.

l.      To find the correlation (r), click on Data, then Data Analysis, scroll down and select Regression.  Hit OK.

m.   Click into the input Y range box, then go back to spreadsheet and select the Change in CPI (Inflation) data column of information.

n.    Click into the input X range box, then go back to the spreadsheet and select the Unemployment data column of information.

p.    Display Slide 12. Point out to students that their graph should look like the one on Slide 12.  See below. 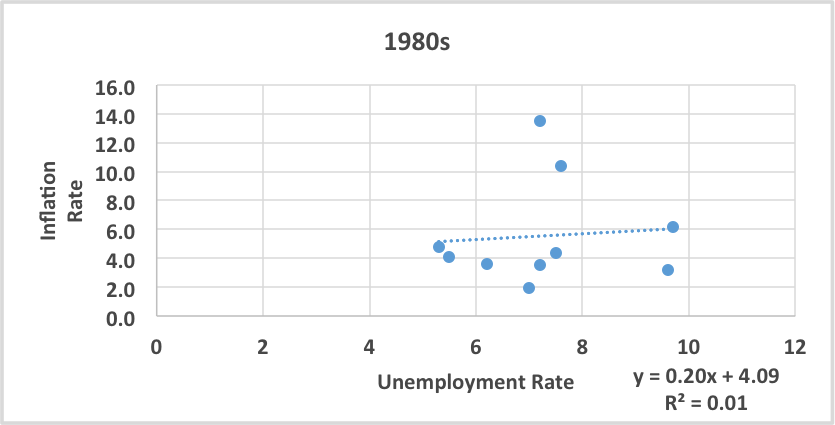 16.  Upon completion ask the students:

17.  Display Slide 13 and distribute a copy of Activity 3 to each student. Instruct students to create a scatter plot using these data.  Allow time for them to create scatter plot, regression line equation, and correlation coefficient (r) as done with the 1980s data as a class group.

18.  Display Slide 14. Point out that their completed graph should resemble the graph on Slide 14.  See below:

19.  Upon completion ask the students:

20.  Display Slide 15. Compare data and results of both graphs.

c.     In the 1980s graph, pick an outlier and explain how it affects the correlation coefficient. [The data from 1981, it made the correlation weaker because it is far from the regression line.]

21.  Display Slide 16 and provide each group/pair of students a copy of Activity 4.  Allow time for them to create scatter plot, regression line equation, and correlation coefficient (r) for the 2000s data, just as done with the 1980s and 1990s data.

22.  Display Slide 17. Point out that their graph should resemble the graph on the slide. 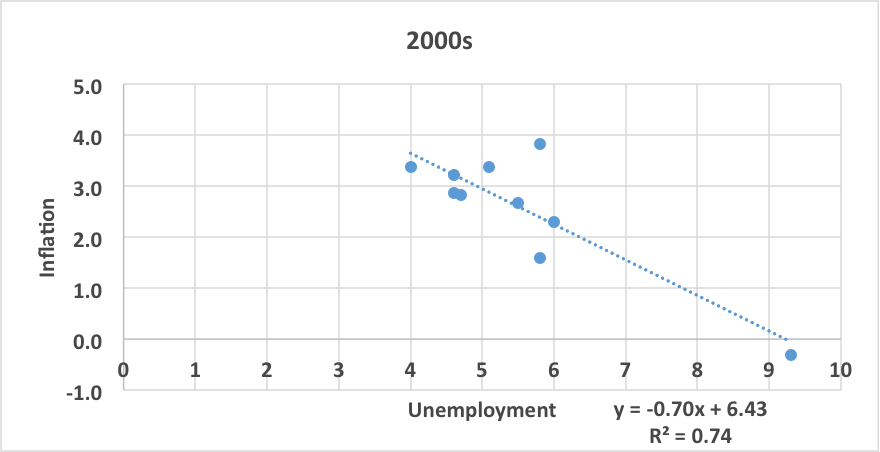 23.  Upon completion ask the students:

c.     Is this different from what we observed in the 80s and 90s data?  [Yes, because in the other decades we observe a positive relationship.]