International trade allows countries to buy and sell both domestic and foreign goods, as well as services and financial assets. A country’s transactions are summarized in a set of accounts called the “Balance of Payments (BOP).” Students will learn how to record transactions in the BOP accounts, and why the sum of the current account and capital account must equal zero.

When one country trades with another, money and financial capital flow between the countries. The balance of payments account captures this flow. In this lesson, students learn how the current and capital accounts are used in foreign exchange. They learn why the balance of payments must equal zero. As an extension activity, students learn that international trade allows countries to buy more than they sell or sell more than they buy. This allows countries to run a current account deficit or surplus, respectively. A country running a current account deficit will borrow from the rest of the world; and a country running a surplus will lend. In the end, all countries are better off through trade. (NOTE: Recently, the name of the capital account was changed to financial account. Most of the introductory textbooks on the market today use "capital account" instead of "financial account". I will use capital account to align with those textbooks.)

1) Ask students, "What does a $-645 billion current account deficit mean?" Ask students, "Should you be concerned if the United States (U.S.) is running a large current account deficit?" To answer these questions, students will need a common vocabulary. Students already have a working knowledge of  Imports, Exports, Balance of Payments. These definitions will help in completing the activity. Also, direct the students to read the appropriate section in their textbooks for capital flows.

2) Distribute a copy of the worksheet, "CEE Balance of Payments – BOP". Here is the Teacher's Version (Answer Key).

3) Explain that you are going to work through 10 transactions with them before independent working begins. Explain that debits are used to record payments and credits are used to record receipts. A debit card is used when making a payment so debits are a minus (-). Credits are a plus (+). Tell students to think of Alpha and Omega as two countries that trade with each other.

3a.) Alpha buys a graphing calculator from Omega for $50. (Debit Alpha $50, Import; Credit Omega $50, Export.) (NOTE: dollar amounts equal and one is positive and one negative. This is always true in every transaction.)

Discuss how every transaction has both a debit and credit. Point out that the current account and capital account are like a mirror. Explain that the balance of payments is always zero. A formula that should be taught is current account plus capital account equals zero. This is how students can check their work. An insight that brought the BOP together for me was a question asked by Robert H. Frank, a Cornell Economist, "If you received a Euro while in the U.S., what could you do with it?" The answer is spend it either on European goods, an import, or buy European capital, capital outflow. This helps me to understand that spending from one country is a debit and is income to another country, which is a credit. Since the debits equal credits, the BOP must be zero. The "O" in BOP is a memory cue for students to know that the balance of payments must be "0."

What would happen if the citizens of Alpha were to buy $10 of illegal drugs from Omega? How would that appear in the BOP? The answer is that transaction would not show up. When looking at actual data, economists use a statistical discrepancy to account for bribes, drug deals, and unreported interest payments. MIT Economist, Oliver Blanchard, estimates that about half of the U.S. money stock is held abroad. Some countries with high inflation use U.S. currency for transactions in their country. Some of the money is used in illegal activities such as bribes.

4.) Ask the students to complete Part II on their own. Give positive and immediate feedback for their work to guide them.

5.) Use the worksheet or the quiz for evaluation.

6.) Use the completed worksheets to make inferences about the balance of payments. Here are some questions to ask your students to help then discover the meaning behind the debits and credits.

6a.) When Alpha ran a negative trade balance, this means that Alpha spent more than it produced. How was Alpha able to "buy" more than it produced? (Alpha borrowed from Omega. In Part I, Alpha's trade balance was $-45. Omega's was $45. What can Omega do with $45 Alpha dollars? It can buy Alpha exports or buy Alpha financial assets. Since Alpha's exports were only $5, Omega must have bought Alpha's financial assets. This is one reason why Alpha had a $155 capital inflow.)

6b.) If Alpha continues to run a negative current account balance, what choices would Alpha make? (If Alpha persistently runs a negative current account balance, Alpha will have to sell more of its financial and physical assets by issuing more bonds or IOUs. This is okay as long as Alpha has the productive capacity to repay the loans. Also, Alpha must weigh the benefits of current consumption versus future consumption when the loans must be repaid–with interest.)

6c.) The current account and capital account are mirror opposites. What are some reasons why? (Double-entry accounting ensures that for every debit there is an equal and opposite credit. Every dollar spent must come back to the source in either an export or a capital inflow.)

6d.) This worksheet did not use the "statistical discrepancy" to adjust the capital account. How can discrepancies arise? (Unilateral transfers are estimated. Illegal activities such as drug deals or bribing of officials. Many avoid tax payments by not reporting interest from bonds. Some under ground activities earn income but are not reported. In 1998, the discrepancy was about $4 billion. In 1997, the difference was $98 billion.)

6e.) The terms "capital inflows" and "capital outflows" might be confusing. For learning purposes, do you think an "increase in foreign holdings of U.S. assets" would be better than capital inflows? Likewise, would an "increase in U.S. holdings of foreign assets" be better than capital outflows? (Answers can vary, however, if Omega buys a used Boeing airplane from Alpha, perhaps students will be able to see that this is a capital outflow for Omega with the alternate terminology.)

What does it mean to say that a country has a negative current account balance? For a country to run a deficit in the current account, means that it is buying more than it is selling so it must borrow the funds from the rest of the world. A country that runs a deficit, will issue debt instruments like treasury bills to finance their current spending. A country might have to raise the domestic interest rate to attract foreign investment. Obtain a copy of the Economist or visit: https://www.economist.com/economic-and-financial-indicators/2011/05/12/trade-exchange-rates-budget-balances-and-interest-rates?story_id=18682709 . On the last page, is a list of interest rates. Ask the students to list the countries by current accounts and show the interest rates on 10-year government bonds.  Then ask the students to sort the countries by the highest interest rate and see that the countries with the highest account deficit also pay the highest interest rate.

Unions argue that the U.S. imports more than it exports because labor is cheaper in foreign countries like Vietnam, Mexico, or India. Have students reveal the fallacy in that argument by using comparative advantage. Point out, that wages are low for a reason in foreign countries. Students can discuss productivity and human capital components of production. In countries that compete directly with domestic producers, say in textiles, some how all profit has been squeezed from these industries using the theory of perfectly competitive markets. 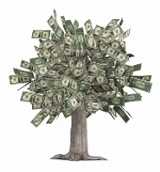 4. Circle one: If a country is running a current account deficit, the capital account must be a (deficit/surplus). [Surplus]

5. If Alpha buys stock in a corporation in Omega, which account, current or capital, would the transaction be recorded? [Capital. (NOTE: Since it increases the holdings of a foreign country’s assets, there would be a transaction recorded for both countries.)]

6. When Alpha imports cheese from Omega, how is the transaction recorded for Alpha. Is it a debit or a credit? [Debit]

9. Circle the answer that completes the statement: Some residents of Alpha send money to charities in Omega. This transaction would be recorded as a debit to transfers (to the world/from the world). [To the world]

10. TRUE or FALSE. Alpha has an underground market in illegal drugs. Because these activities are not reported on the balance of payments, the current and capital account would not balance. [FALSE]

Tips and Strategies to Pass the AP Economics Exam: FRQ's and Graphing

In this webinar, you will help the students earn as much credit on their AP Macro/Micro FRQs as possible.
Key Concepts: Aggregate Demand, Aggregate Supply, Balance of Trade and Balance of Payments…
60 mins
Apr 12 7:00-8:00pm ET
Webinar
See On-Demand Webinar

The European Union: Past, Present, and Future

In this webinar, you will explore the genesis and development of the European Union over time and ponder its future.
Key Concepts: Balance of Trade and Balance of Payments, Budget Deficits and Public Debt, Economic Institutions…
60 mins
Mar 01 7:00-8:00pm ET
Webinar
See On-Demand Webinar

NJCEE Presents: Economic Institutions and Why They Matter