The Economics of Voting

Since the 1960’s, many Americans eligible to vote have not bothered to do so- not even in presidential elections. Low rates of participation in voting have been worrisome to people interested in preserving our democratic traditions. Economists have tried to explain why people didn’t vote. They have suggested that people who chose not to vote were acting rationally in that the costs associated with voting (such as time spent on registration, rearranging work schedules, getting to the polls, and gathering information on the candidates) appeared to outweigh the benefits (influencing the outcome of an election or gaining the satisfaction of being a good citizen). More recently, however, voter-participation rates have gone up again. What has caused the trend to change? Why are more people voting? This lesson will examine factors that affect voter turnout. 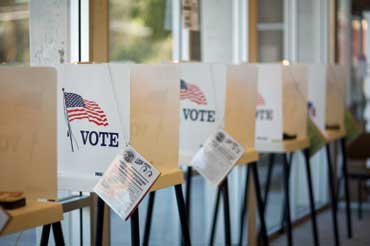 Then explain that economists also have wondered why people don’t vote. They have studied this question, and many of them say that the reasons for not-voting have to do with costs and benefits. Many Americans don’t vote, these economists say, because it isn’t worthwhile to do so. The costs of voting (for example, time spent learning about the candidates, time taken away from work to get to the polls) outweigh the benefits, so they just don’t vote. Discuss this analysis briefly to make sure the students understand it.

Conclude the introduction by stating that, more recently, things have begun to change. Americans have begun to vote again, in larger numbers. What could be going on here? Why this change? In this lesson, the class will explore these questions.

With the students, take note of background information to elaborate on the introduction: In the presidential election of 1960, voter turnout reached almost 65%, but in the following five elections the percentage decreased at a steady rate. The percentage increased slightly increased in 1984 and 1992 before fell again, reaching a record low in 1996 when less than half (49.1%) of the voting population actually voted. Since then, however, the percentage of eligible U.S. voters who actually vote has increased to its highest percentage since 1968. What caused the downward trend from 1960 to 1996, in which the costs of voting apparently outweighed the benefits? And what contributed to the turn around after 1996, when participation rates for eligible voters began to rise? Direct students to go to https://www.infoplease.com/us/government/elections/national-voter-turnout-in-federal-elections-1960-2014 . Ask:

How does this background information square with the economists’ view that votes are influenced by costs and benefits? Let’s take a closer look..

Challenge the students with a task: How might we reduce the costs of voting or increase the benefits? Have the students work with a partner and list as many ideas as they can on a sheet of paper.

[Possible way of reducing the costs of voting:

Introduce the factor of age. Explain that in 1972, the minimum age for voting was reduced to 18, opening up voter participation to a more youthful crowd. But since 1972, the youth turnout (18-24) in voting has only exceeded 50% only, in 1972. The population of the United States has increased, and the total number of young people voting has increased accordingly, from 14.5 million in 1972 to approximately  23 million in 2008. Also, from the 2004 to 2008 election, the total number of Americans voting increased by 3.4 million. But did this increase in total voters mean an increase in the percentage of U.S. citizens that voted?

With a steady decline in voter participation rates after 1972, youth voter turnout reached an all-time low in 1996, when only 37% of U.S. citizens aged 18-24 voted. This trend soon ended, however. Youth voter turnout increased to 40% in 2000 and to 47% in 2004. In 2008, it matched the previous high set in 1972, at 52%. Also, since 1996 more Americans aged 25 and older have been voting; the percentage increased from 61% in 1996 to 66% in 2008. Economists offer several explanations of this upward trend. For starters, some states have adopted “Election Day Registration” and these states had three of the top five totals for youth turnout (Minnesota, Wisconsin, and Maine). Also, some states have made progress in locating polls at convenient locations such as at state motor vehicle agencies, thus decreasing costs and increasing voter-participation rates. The cost of voting may also be reduced by programs in which sample ballots and information regarding polling places are mailed out to prospective voters, or distributed door-to-door.

[Note to the teachers: These are only some of the factors that have a bearing on voter turnout. Please regard them as starting points for your lesson, not limits.]

Voter participation rates seem to be lowest when the economy is in good shape. Have the students visit https://www.270towin.com/ and scroll through the ‘Select the Year’ option above the map. Tell them to read through the ‘Issues of the Day’ below the map from 1972 to 2008, looking at the years in which it says the economy is in good shape and the years when it is in bad shape. Also, note other issues that were important during those election years. Then have the students visit https://civicyouth.org/quick-facts/youth-voting/ and compare these dates with the percentage of all citizens voting in ‘Graph 1’.

Have the students print out their note-taker and turn it in.

Have the students use these two websites (https://www.presidency.ucsb.edu/statistics/data/voter-turnout-in-presidential-elections and https://news.gallup.com/poll/158399/2012-electorate-looks-like-2008.aspx ) to learn about election turnout rates and the voting behavior that goes along with it. Ask them to write a one-page report reflecting the data that they came across in these articles, as well as other articles they have read for the lesson. Some links within this lesson’s resources will be particularly helpful (in relation to ethnicity, gender, age, etc.). In their papers, the students should identify and explain the factors they see as the most influential in determining voting behavior.