Specialization and the Decathlon

This lesson uses results from the 2008 Summer Olympic Games to explain that athletes specialize in sports and events for which they are most skilled for the same reasons that individuals and nations specialize in the production of goods and services for which they have an absolute or a comparative advantage.

2. Michael Phelps and Usain Bolt are both great athletes.  Why did they concentrate on performing in certain athletic events (Phelps in swimming, Bolt in track and field races) rather than in a wider range of events? 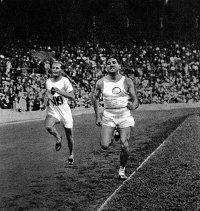 2. Distribute a copy of Activty 1 (“Bryan Clay:  The World’s Greatest Athlete?”) to each student.  Tell students to read Activity 1 and ask them to respond, verbally or in writing, to the following statement:

“Bryan Clay should not be considered the greatest athlete in the world based on his performance in the 2008 Summer Olympic Games.  Although he won the gold medal in the decathlon, his performances in the ten individual events fell well short of the world record in all of these events.”

[Students will offer different opinions.  Those who believe Bryan Clay demonstrated that he was the greatest athlete in the 2008 Summer Olympic Games will agree with Bruce Jenner that “The basis of athletics is the ability to run, jump and throw.  The decathlon tests that.”  Other students may argue that, despite his overall ability, Clay did not demonstrate superiority in any one event.  Both points of view are opinions, which cannot be proven right or wrong.]

3. Review the definition of specialization:

A situation in which people produce a narrower range of goods and services than they consume. Specialization increases productivity; it also requires trade and increases interdependence.

4. Most Olympic athletes – such as Michael Phelps and Usain Bolt – specialize in individual athletic events.  Ask students to use the definition above to explain how specialization in production is different from specialization in athletic competitions.

[Athletes do not produce goods and services and do not trade their services for other goods and services.  However, specialization does increase productivity.  The definition of productivity is:  the amount of output (goods and services) produced per unit of input (productive resources) used.  In athletic events, productivity can be measured by performance in athletic events.   By specializing in individual sports for which they have exceptional athletic ability  – Phelps in swimming, Bolt in 100 meter and 200 races – each was able to earn multiple Olympic gold medals and world records in those events.]

5. Review the definition of absolute advantage:

The ability to produce more units of a good or service than some other producers using the same amount of resources.

6. Review the definition of comparative advantage:

The ability to produce a good or service at a lower opportunity cost than some other producer. This is the economic basis for specialization and trade.

Opportunity cost is the second-best alternative (or the value of that alternative) that must be given up when scarce resources are used for one purpose instead of another.  Comparative advantage is used to explain why individuals and nations benefit from specialization in production and trade even when one of the individuals or nations has an absolute advantage in the production of two goods or services.  Examples of comparative advantage typically assume that two individuals or two nations can produce certain amounts of the same two goods in the same period of time.  For example, the table below lists the amounts of wheat and computers that producers in Swizzleland and Astroland can produce in one day.

Ask students which nation has an absolute advantage in the production of wheat.  Ask students to explain their answers.

[Swizzleland has an absolute advantage in the production wheat because it can produce more bushels of wheat using the same resources – producing in the same amount of time – than Astroland can produce.]

Ask students which nation has an absolute advantage in the production of computers.  Ask them to explain their answers.

[Swizzleland also has an absolute advantage in the production of wheat because it can produce more wheat using the same resources – producing in the same amount of time – than Astroland can produce.]

Students were asked to consider four questions at the beginning of the lesson.  We can now provide answers for these questions (if you prefer, have the students record their answers on the notepad below):View Interactive Activity

Have the students complete this Worksheet.

1. In the 2008 Summer Olympic Games Usain Bolt represented Jamaica, a nation with a population of less than 3 million and a per capita income less than one-fifth the per capita income of the United States.  Athletes from the United States won a total of 110 medals (36 gold, 38 silver and 36 bronze).  Athletes from Jamaica won 11 medals (6 gold, 3 silver and 2 bronze), all of them in track and field.  In addition to Usain Bolt’s victories in the 100 meter and 200 meter races, Jamaican runners won gold medals in the women’s 100 meter and 200 meter races and the men’s and women’s 4 x 100 relay races, defeating runners from the United States in each race.  By specializing in the events for which they had an absolute advantage, Jamaican runners demonstrated that small nations can compete successfully with athletes from much larger countries in these events.

Ask students to use the CIA Factbook to indentify the Jamaica’s main exports, export partners, imports, and import partners.  Ask students to explain why Jamaica is able to export some of the goods it produces to larger, richer countries such as the United States.

2. A bobsled team from Jamaica competed in the 1988 Winter Olympic Games held in Alberta, Canada.  Although the team did not come close to earning a medal in this event, the team garnered much media attention and sympathy from the general public as an underdog that exemplified the Olympic ideal.   The bobsled team even inspired a fictional film version of its story – Cool Runnings – that starred the late, great comic actor John Candy.   Athletes from the U.S. won 37 medals in the 2010 Winter Olympic Games in Vancouver Canada, including a gold medal in the four-man bobsled.  Jamaica has never won a medal in the Winter Olympic Games.  Ask students why Jamaica does not have an absolute advantage in winter sports.

__________________________
1Pierre de Coubertin, considered the father of the modern Olympics, adopted a phrase from a speech given by Bishop Ethelbert Talbot at a service for Olympic champions during the 1908 Olympic Games. The Olympic Creed reads:

Have the students complete the following questions however you prefer.

1. The results from the 2008 Summer Olympic Games show that, compared to Bryan Clay:

5. The ability to produce more units of a good or service than some other producers using the same amount of resources is the definition of: