A Pet For Beans from ‘Jack and the Beanstalk’

After listening to a computer-read story, "Jack and the Beanstalk," the students will find out that beans were used as an exchange for Jack’s cow. Jack traded his pet cow for an old man’s magic beans. Were they both happy? They should be! People exchange goods because both feel they will be better off after the exchange.

When you make a trade, both people should be satisfied after the trade. Why? [You should not have traded if you did not expect to be satisfied about it.]

Read the story Jack and the Beanstalk. For a PDF file of the story, click here. Be sure to emphasis the part where Jack trades his pet cow for beans.

Was the old man satisfied he got the cow? [Yes.] Was Jack satisfied that he got the magic beans? [Yes.] When you trade you should both be satisfied. Was Jack's mom satisfied? [No.] What did she want Jack to get in trade for the cow? [Money.]

But Jack and the old man traded the cow and beans. The old man bartered the beans for the cow.

Do you think Jack's mom was satisfied about the exchange of the cow for beans at the end of the story? [Yes.] Do you think Jack got Milky White back from the old man? [Answers may vary.]

When you exchange one thing for another, the trade should make both people satisfied. You should not trade for something you do not want. When you trade and you don’t use money, it is called barter.

Have students bring a small item from home or provide them with items such as stickers, pencils, and candy. Give them a set amount of time to trade their items with one another. When ‘trading time’ is over, have students discuss their trades with the rest of the class.

Have students use The Trading Game to practice trading with others. 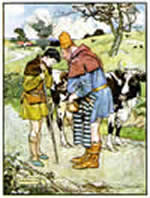 The Trading Game is an interactive activity in which students will be assigned an item and then be given the opportunity to trade for other goods with other people. They will be asked if they would like to trade their item for the other goods. They can decline to trade or they can "trade" their item for another object. After the trades have occurred, the students will be asked if they are satisfied with their trades; they will be told that, if they are not satisfied, they should not have made the trade in question. The students also will be asked whether their exchange was an example of barter or whether they used money in the trade.

This activity loops continuously. If students are sharing computers, give each child an opportunity to go through two to three cycles of the Trading Game before letting another student take their turn.

Note: Children tend to want to make a trade just to be trading something. Many times, after the fact, they are very upset that they traded. The lesson here is that both parties to a trade should benefit from the trade. If they don't expect to benefit, then they should not make the trade.

The objects that are assigned to the student are generated randomly, so students can play the game several times to reinforce the concepts in the lesson.

Looping Around the World: A Game of International Trade

In this economics lesson, students will use looping cards to define and provide examples of the terms associated with international...
Key Concepts: Benefits of Trade, Trade, Exchange and Interdependence
90 mins.
Lesson
See Lesson

Fluctuating currency values can have a major impact on an economy – we’ll examine why this happens and how policymakers...
Key Concepts: Balance of Trade and Balance of Payments, Barriers to Trade, Monetary Policy…
60 mins
Jan 09 5:00-6:00pm ET
Webinar
See Upcoming Webinar